When we planned a winter trip to Alaska, one of our big hopes was that we’d get to see the aurora borealis. We didn’t book a northern lights tour, but we had rented a car so we figured we’d do some northern lights chasing on our own. During our visit, the aurora forecast in Anchorage looked pretty promising. The question we asked ourselves over and over during the week was, “Would the weather cooperate, and would we be lucky enough to get to the right place at the right time? “

Every evening before we went to bed, I would check both the weather forecast and the northern lights forecast. And, every night I would get the same results—a fairly decent aurora forecast, but a very cloudy weather forecast. Our entire trip was plagued with steady cloud coverage. We were bummed.

Even though we were disappointed in our northern lights viewing opportunities, we still had a wonderful trip. We took a road trip to the cute town of Homer, explored Anchorage, went snowshoeing, joined in the festivities at the Fur Rondy Festival, took a scenic flight plane ride over the Katchemak Bay and glaciers, and went glacier hiking. It was a week full of fun to say the least. Then, on the last night of our trip, it looked like our luck might change for the better. The clouds had started to lift and the aurora predictions were the best they had been all week. It was too good of an opportunity to pass by, so we started to make plans to hopefully catch the show.

Our flight left at 6 a.m., so we had a pretty early wake-up call on our hands. The airport was only a short drive from our Airbnb, but we had to fill up on gas, return our rental car and check our luggage (winter gear is sure bulky!), so we were planning on arriving at the airport between 4:00-4:30 a.m. That meant that if we wanted to search for the northern lights, it was looking like we’d have to pull an all-nighter. After taking a quick nap, packing our bags, and crossing our fingers, we made our way out of town to get away from the city lights. As we were driving, I started shrieking—the lights were starting, and they were so bright we could see them in town! Micah had a hard time keeping his eyes on the road, but we were on a mission, so we kept driving towards a pull off on the Seward Highway that we had scouted earlier in the week. If we were lucky enough to spot the northern lights, we wanted to have a pretty foreground for our photos, and the mountains and water of the Turnagain Arm seemed to be the perfect place. Once we made it to our destination, we sat and waited. The northern lights that we saw earlier had died down, but luckily, after just a few minutes, they started back up again in full force. Practically the entire sky was lit with dancing green lights that gave way to some bursts of light purple. 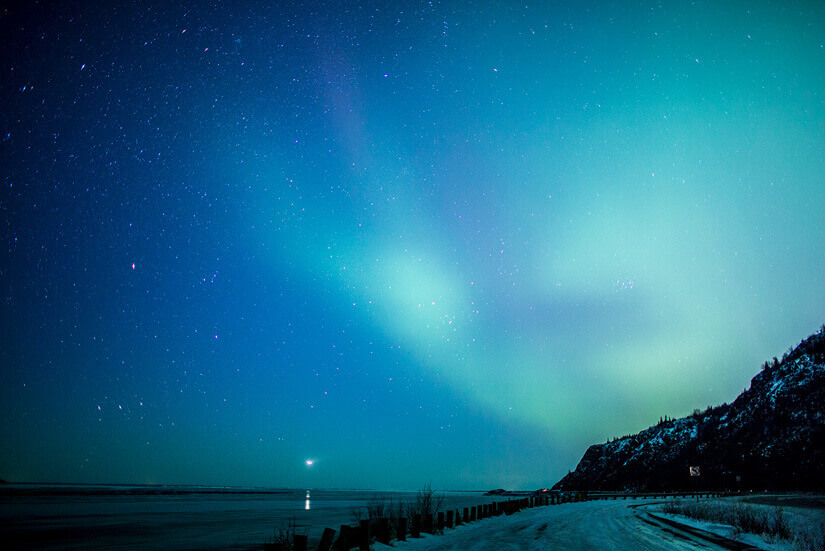 We stood in awe as the aurora put on one heck of an amazing show. Every time we thought the northern lights were going to quiet down for the night, they would just take a short hiatus before coming back in full force. The lights lasted for several hours, and we were beyond excited that we were finally able to catch this natural phenomenon. Eventually, we had to pull ourselves away when the clock struck 3:30 a.m., as we had a bit of a drive to reach the airport from where we were. Even though we had a long, sleepless night, it was more than worth it for our first glimpse of the aurora borealis. When and Where to See the Aurora

To see the northern lights, you need a night that is dark and clear, and there needs to be active solar flares or winds from the sun. The lights are created when charged particles that were released from the sun’s atmosphere collide with the earth’s atmosphere. There’s a lot more science behind it, but that’s the basic gist on a very simplified level.

As far as locations go, your best chances of seeing the aurora are in locations within or near the arctic circle, but during strong geomagnetic storms, the northern lights can be seen much farther south (they’ve been spotted as far south as New Orleans, LA!). Remember though, the arctic and many northern destinations, such as Iceland, Alaska, northern Norway, and northern Sweden, have 24 hours of sunlight in the summer. That means that you need to visit these destinations in the winter, spring or fall to see the northern lights. It doesn’t mean the lights are not active, but it does mean you won’t be able to see them.

On the other hand, regions like the boundary waters in northern Minnesota and southern Canada can give you great conditions for viewing the northern lights year-round as they are far enough south to get dark but northern enough to still see the lights when the conditions are right.

Once you have a location in mind, you need to take the aurora forecast and viewing conditions into account. There are several great websites and Facebook groups to check out—here are some of our favorites:

There is a lot to learn when you want to predict the aurora, but generally, the higher the Kp index, the larger the solar storm. Seeing a high Kp index doesn’t mean the lights will be active where you are, though, because many other factors come into play. Honestly, we are still pretty confused about all the details that go into the northern lights forecast, but just know that the forecast websites we linked to above are a good jumping off point to understanding and predicting the northern lights.

And remember, a high Kp index isn’t a guarantee that you will see the lights and a low number doesn’t mean you won’t see them—the two times we’ve seen the lights, the Kp forecast was 2 and 4 (on a scale of 0-9). And we’ve also heard that they can be seen even when the forecast is zero!

Have you ever seen the northern lights? Tell us where and share your best tips with us in the comments below!