As the board tipped slightly off kilter, I went flying off the edge and rolled down the hill. Sand caked every inch of my body. With a laugh and a quick dusting off, I was ready to go at it again. There would be time for a shower later. 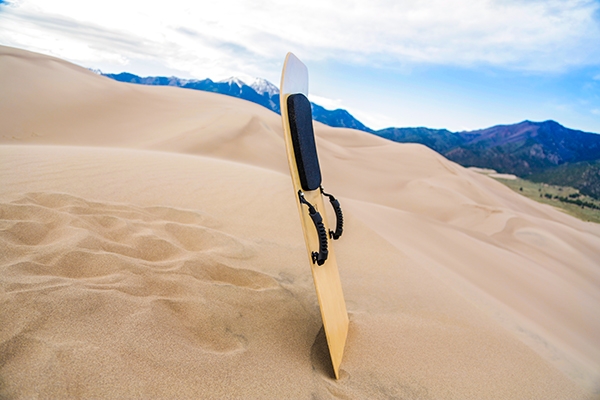 Tucked in the midst of mountains and plains of Colorado, lies an unexpected swath of land called the Great Sand Dunes National Park. It’s unlike anything I’d ever seen before–I never expected to see rolling sand dunes with vistas of mountains and prairies in the middle of Colorado. This kind of landscape is just begging for adventure. And, it’s exactly what we soaked up on our afternoon visit to the park.

The park itself does not offer rentals, so to get one for the day, you need to look offsite. I found two nearby spots that rent sandboards to visitors: Kristi Mountain Sports in Alamosa and Oasis Store. We made our way to the Oasis Store and soon enough we were waxing our boards and heading towards the piles of sand nearby. There were three of us, so we rented two sandboards and one sand sled in order to try both options out on the slopes. I underestimated how large the dunes would be–to my Minnesotan brain, they looked like mountains themselves, and I couldn’t wait to get out and hike. Our journey started with unloading our gear and making our way across the shockingly cold water flowing at the base of the dunes. I winced in surprise at my first step in the frigid ice water and quickly tried to warm up my feet on the nearest dry sand plateau. To get a quick feel for the dunes, we hiked to one of the smaller slopes near the front of the dunes. I sat on my sled ready to go, and nothing happened. I’m not sure if I just needed to wax my board more or if the slopes weren’t steep enough, but it wasn’t working too well. So, off to steeper slopes we went. The hike was pretty grueling in the afternoon sun, especially because we forgot our water. When the sand was soft, it felt like each step required double the effort, but we received some respite on the harder, packed down sand. Once we made it higher, we decided to try again. With a bit more waxing, we were ready to go. This time it was a huge success. We went flying down the hill and took quite a few spills along the way. The sled was very difficult to keep level, and surprisingly, I think we had just as many wipe outs on the sled than on the board! After filming some fun shots for a project that we were working on and getting plastered in sand, we decided to hike even further afield. Lots of huffing and puffing later, we were ready to slide again. Thankfully, the way down was a lot quicker and easier than the hike up. Soon enough the sun was starting to set and our stomachs were beginning to growl. It was time to turn in our boards and call it a day. As we watched the dunes fade away in our rearview mirror, we realized that the lingering sand everywhere would stick around to remind us about our adventure for days to come.