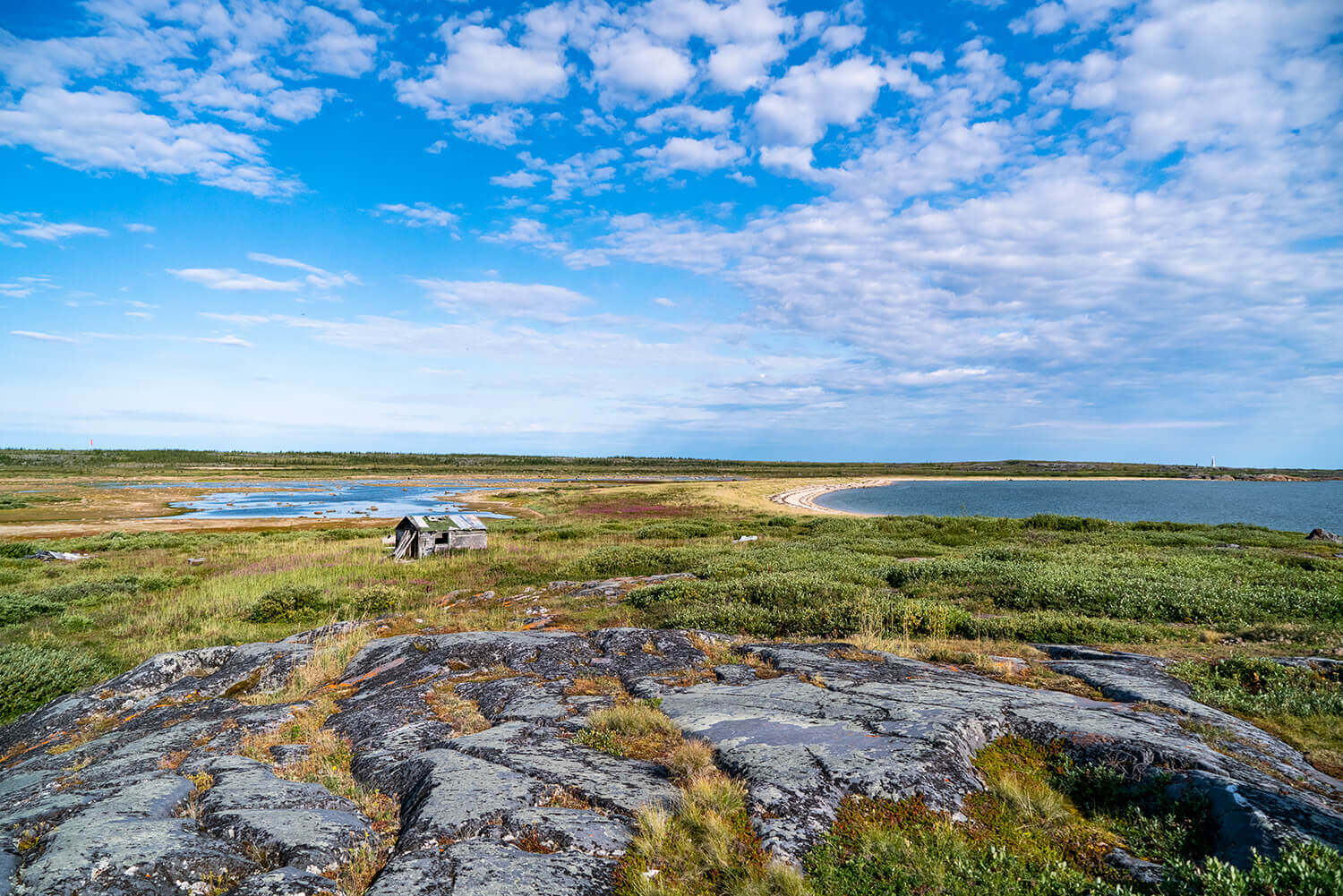 Churchill is home to so many wonderful adventures. With the potential of polar bear run ins, we would have thought exploring on foot and hiking in Churchill would be mostly off limits. But this couldn’t have been further from the truth! During our visit with Travel Manitoba, we went on a couple of different hikes in Churchill. One was a hike from Sloop Cove to Prince of Wales Fort. The other was a driving town tour where we regularly got out of the vehicle to explore on foot. The town and area tour with Paul from Nature 1st started when he picked us up at our hotel in his big yellow truck. Our group was small, with just Micah, me, and one of the friends we met on our train ride to Churchill earlier in the week. During our half day tour of the region, we learned so much about Churchill and what it is like to call the town home. We heard stories about polar bears, the polar bear alert system, the environment, the locals, and the area’s history and culture. First up on our itinerary was a drive through Polar Bear Alley at the Churchill Wildlife Management Area to search for polar bears. We stopped by the beach a couple of times when we spotted grass that looked like it might have just been a recent polar bear bed. When we got out of the truck to walk around, Paul grabbed his riffle and made sure we left the doors open just in case we came across a polar bear. Bear safety is taken seriously in Churchill, and it was fascinating to learn about. It turns out we didn’t have any luck spotting bears that day, but we did manage to fit in lots of additional stops. One of my favorite stops of the morning was when we were able to get out and go for a short hike around the rocky landscape by the bay. Once again, Paul carried his riffle just in case we spotted a bear and needed protection. While we walked, we learned about the rocky shoreline and how polar bears can easily hide there. We also looked at the intricate designs of the lichen on the rocks, and the moss, wildflowers, and berries that grow nearby. Next, we made our way to the Churchill Northern Studies Centre for a look around. The facility focuses on research to understand and sustain the environment of the north. We also stopped at the Churchill Rocket Research Range, a former rocket launching site. The rockets that were launched here were mainly used to study the upper atmosphere. And last, but not least, we stopped outside of the polar bear jail. Yes, in Churchill, polar bears can get thrown in jail! The jail was created to reduce the interactions between bears and humans. If a bear becomes dangerous or troublesome, authorities will tranquilize it and capture the bear. The bear will be kept in jail until enough ice forms on the Hudson Bay and the bear can be transferred far away from town via helicopter. Our half-day tour with Nature 1st was very interesting and a fun morning. We learned so much about Churchill during the tour. We got to see the land up close in a different way from the other tours during our trip. Even though we didn’t go on a long hike, we loved getting out of the truck to explore on foot.

The Sloop Cove nature walk with Sea North Tours was our last adventure in Churchill before our flight back to Winnipeg. To get to the start of the hike, we hopped in a zodiac boat and rode across the Churchill River to Sloop Cove. The entire 2.5-mile hike from Sloop Cove to Prince of Wales Fort is rich with history, and it starts off right away at the beginning of the hike. When you get off the boat, you will be walking on a rocky area. If you look closely, you will see 18th century graffiti that was carved by Hudson Bay Company men. Their names are scrawled out artistically over the rocks and it’s amazing to think that they were carved hundreds of years ago. Some of the engravings we spotted were created by famous explorers such as Samuel Hearne, and others were from sailors, captains, carpenters, and the like. As we looked at the engravings, our guide told us stories about the history of Churchill and how this area played a big part in the formation of the current day region. Prince of Wales Fort was once a fur trading base, and Sloop Cove was where the the men of the Hudson Bay Company took refuge. After exploring the rocks, we continued on the hike with our guide and a bear guard (safety first, once again!). We walked through the tundra meadow to explore the beautiful and relatively untouched landscapes. The moss and wildflowers were everywhere, and it was such a pretty sight. Next, we made our way down to the beach for a stroll. The tide varies greatly in the Hudson Bay and Churchill River, so we had to time the hike with the tides to make sure the beach was actually exposed! Once we made it to the Prince of Wales Fort, we had a chance to head inside for a look around. We listened to more stories about what life was like when the fort was active. Then, we made our way to the boat for the ride back over the Churchill River. It’s so interesting to see history come alive around you. That’s exactly what we found again and again throughout this hike. We weren’t quite ready to leave Churchill when it was all said and done. We found a deep connection with this tiny town in the north. It’s already pulling us back again for another visit someday soon.

Would you or have you done any hiking in Churchill?

Special thanks to Travel Manitoba, Nature 1st, and Sea North Tours for hosting us on these adventures. As always, all opinions are our own.