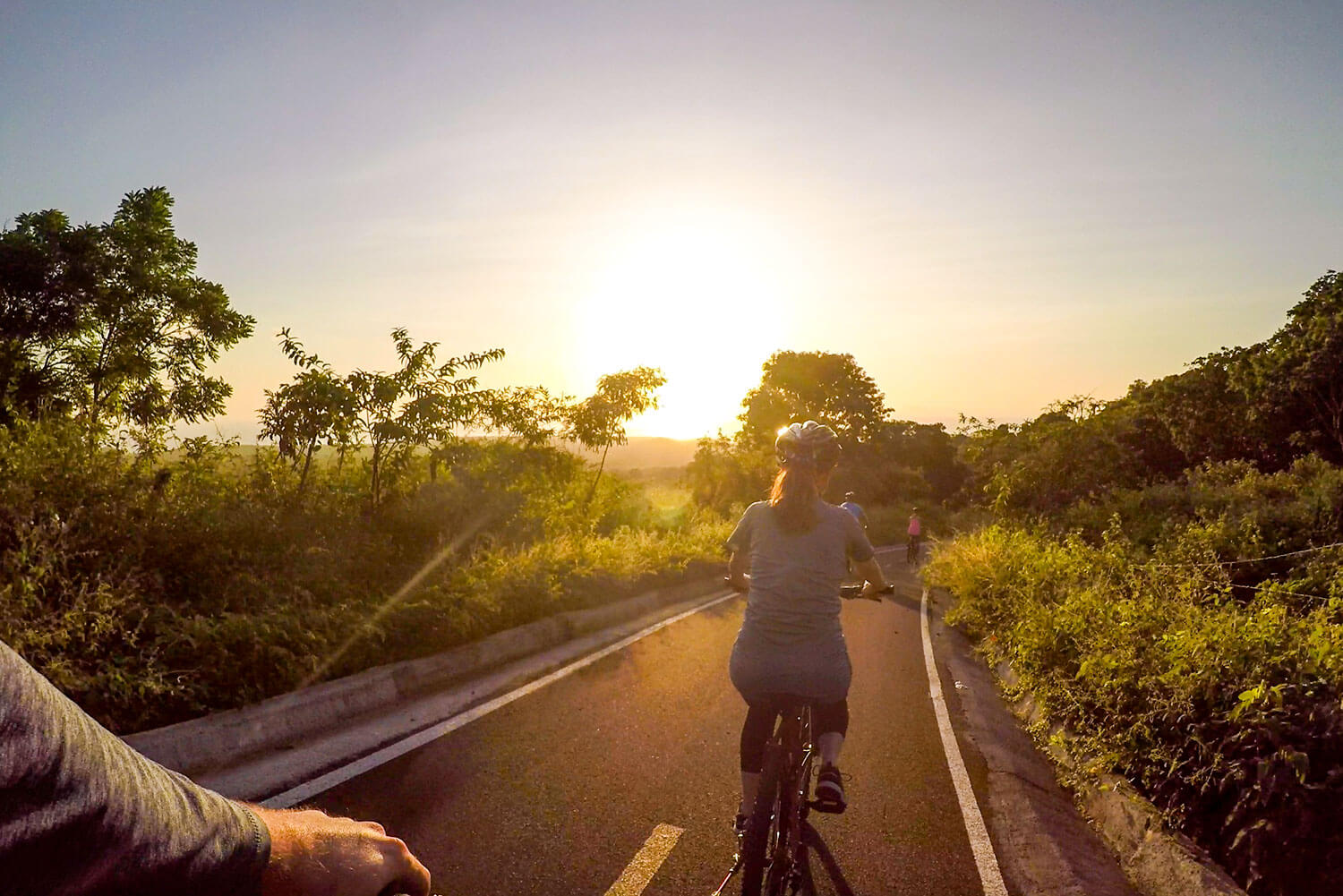 During our time in the Galapagos Islands, we were able to experience a multitude of adventures including snorkeling, SUP, kayaking, hiking, and more. I love almost every adventure thrown my way, but the one I was the most hesitant about during this trip? Biking. We have bikes and have ridden bike in a variety of places during our travels, but I’ve had several instances that have made me a bit leery about my biking skills. So, when I saw two bike rides on our itinerary for our Galapagos trip with Galakiwi, I was nervous. At the same time, I was excited to check out the islands on two wheels. Micah on the other hand, is always up for a biking adventure!

Our two bike rides were on different islands and through completely different landscapes. The first one was on our first night on San Cristobal, and the second bike ride was on Isabela Island. On San Cristobal we made our way through the highlands on a paved path towards the beach. On Isabela Island our bike path was a gravel road leading to the Wall of Tears. The two experiences were drastically different, but we loved them both.

We hit the ground running when we arrived in the Galapagos. After checking into our hotel and going over our trip itinerary, aka “the super plan”, we geared up for our first adventure. The group jumped into a few taxis and made our way to the highlands of San Cristobal island. While the crew unloaded our bikes, we took a short hike to a nearby church and viewpoint where we were rewarded with expansive views overlooking the island and ocean below. Next it was time to pick our bikes and start off on our ride. The new bike trail on the island is a two-lane path that was built next to the road. It was great that we had a dedicated path and didn’t have to worry about biking with traffic. There were also support vehicles following our group, so if anyone decided they weren’t up for the ride, they could hop off at any time. Thankfully, the ride was mostly downhill, which means we were able to coast our way towards the beach. We also had one stop to make along the way to break up the bike ride. The family of our guide, Pepo, owns an extraordinary property. In addition to a restaurant/bar there is a giant tree house built with recycled materials. The tree has both an upstairs and downstairs—the house comes complete with a bed, bathroom, kitchenette and running water. You can get down from the tree house either via the rope bridge or sliding down on a fireman’s pole! There was even a rope swing and rope for climbing on the branches outside. It was such a neat property, and the tree house can even be rented for the night! After exploring the house, we relaxed in the garden and snacked on delicious banana bread and coffee. Once we hopped back on our bikes, we continued on towards the beach and arrived just in time for sunset. We watched the sun dip below the horizon while standing on a beautiful, rocky beach with marine iguanas. It was a wonderful introduction to San Cristobal and the Galapagos Islands as a whole. After the sun went down, we were supposed to ride our bikes back into town. There was a steep hill in front of us and it was getting dark, so a few of us decided to hop in the support vehicles and take the easy way into town. Even though I skipped the very last portion of the ride, I was glad I completed most of the ride and came out on the other side unscathed! Biking to the Wall of Tears on Isabela Island

Our second biking adventure was on Isabela Island. We picked up our bikes from the shop in town and rode out towards the Wall of Tears. The path to the wall used to be open to cars, but it is now only open to bikers and walkers. After a short ride through town, we found ourselves riding on a beachside path with beautiful views overlooking the ocean. Once the path diverted from the beach and into the trees, we were almost at the trailhead for the road to the Wall of Tears. The gravel road is around 3 miles long and has a number of small hills. The ride was pretty easy on the way out and went fairly fast, but we arrived covered in sweat—it was hot! Oh, and Micah got a nice surprise when we rode underneath a group of trees. Some type of animal, we think it had to have been an iguana, pooped all over him! We almost died laughing. He was covered in greenish brown goo—his hat, shirt, shorts…everywhere! Needless to say, a shower was definitely in order at the end of the bike ride. Once we made it to our destination, we parked our bikes and went for a walk along the wall. Back in the 1940’s and 1950’s Isabela Island was actually home to a penal colony. The Wall of Tears is essentially a giant wall of lava rocks carried from a nearby field. The wall is around 65 feet high and over 300 feet long, and it was built by prisoners as a way to break them. I can’t even begin to imagine what life must have been like during that time—it was a sobering experience. We walked along the wall while learning about its history, and then continued on the trail which led up the nearby hill. On top of the hill we found even more expansive views of the island where we took a break underneath a shaded bench area. The ride back from the wall was pretty easy as well, but with most of it being downhill, I was definitely the last one in line. I went extremely slow because I was worried about losing control of my bike on the gravel, but luckily, I didn’t fall. On the way back Micah, Steph and I got turned around—we were supposed to head to the Tortoise Breeding Center but since I was riding so slow we got a little behind the rest of the group and ended up in town instead. Tim, one of the Galakiwi owners found us, and since we were close to the bike shop, we returned our bikes and took a taxi out to the turtle sanctuary instead. It all worked out well in the end and the three of us were back with the group in no time! To finish off the morning, we cooled down with popsicles and then took a tour of the Tortoise Breeding Center. We learned about the history of tortoises on the islands and were able to see some adorable baby turtles! It was a great way to end the bike ride. Both bike rides ended up being a great time, and I’m glad we were able to experience biking on the islands. I’ve always thought that all the adventurous activities in the Galapagos Islands would revolve around water, so it was fun to try something a little unexpected!

Special thanks to Galakiwi for hosting us on an amazing adventure! As always, all opinions are our own.