This is a guest post by one of our favorite travel writers, Emma Higgins, from Gotta Keep Movin’. She has been up to some wonderful adventures recently, and we are excited to have her share some of her favorite hiking spots in Portugal with you!

Situated on the edge of Europe and battered by the Atlantic Ocean, Portugal is home to some of the most dramatic coastal scenery in Europe. Further inland, it’s also possible to find jaw-dropping mountain landscapes that are barely touched by travelers.

I was stationed in Portugal for an entire year while writing my book about the country, and when I wasn’t scribbling away I was lacing up my hiking boots and heading for the hills, cliffs, and country roads. If you’re interested in hiking in Portugal, consider travelling to these top five destinations.

Covering 450km along the southwest coast, the Rota Vicentina is one of the best long-distance hiking trails in Portugal. The very southern tip of the route lies at Cabo de São Vicente, the most southwestern point in Europe characterised by mind-boggling cliff scenery and an end-of-the-world atmosphere. The rest of the route north is just as big and bold, with two options for hikers – the Historical Way, which takes you across the inland through rustic villages and across plains, or the Fisherman’s Trail, which hugs the coastline. If you don’t have time to complete the whole thing, there are also eight circular routes that have been added to the two main trails. These show you some of the Rota Vicentina’s best highlights in just a few hours or half a day. We recommend the Bordeira route, which connects you with some of the best beaches in the region.

As Portugal’s only national park, it’s of course implied that you’ll find some of the country’s best nature in Penada-Geres. This magnificent area is located right up in the far northwest of Portugal, and shares a border with Spain. As well as hiking, there’s ample opportunity for biking, canyoning, kayaking, horse riding, and more here – plus it’s relatively low on the Europe radar, with mostly Portuguese travellers exploring it. Trails criss-cross all over the region, meaning you can park up just about anywhere and wander your way across the hills. For a manageable four hours try the Trilho da Cidade da Calcedónia route, which starts and ends at Campo de Gerês. Also make your way up to Pedra Bela, near the village of Gerês, one of the park’s most spectacular viewpoints. There are plenty of shaded trails around her to discover if you’re visiting at a hot time.

Tucked away in the far northeastern corner of Portugal, Montesinho offers some of the most undisturbed nature in the country. The region it calls home – Trás-os-Montes – was cut off from the rest of Portugal for centuries, and remnants of its isolation can still be felt here today. Along this parks many hiking trails, you’re likely to be alone. Head to the village of Montesinho and walk up to Serra de Montesinho, the highest peak in the region – a moderate level round trip of just under 8km. Alternatively, take a stroll around the countryside near the village of Dine in the center of the park, another 8km walk that passes by Neolithic caves.

Portugal’s most southern region is among the most tourist-heavy in the country, but don’t be put off by the sun, sea, and sand worshippers that flock here every year. There’s plenty still left to discover in the Algarve, especially if you’re willing to go off the beaten track on two feet. The 300km Via Algarviana is the perfect route for hikers seeking something different in the Algarve. Running from Alcoutim on the Spanish border to Cabo de São Vicente, the trail winds through the region’s northern villages not often explored by other travellers. Highlights include the historical town of Silves and the Serra da Monchique, the tallest peaks in the Algarve.

Cast adrift out in the Atlantic Ocean off the northwest coast of Africa, Madeira is Portugal but not quite as you know it. While the main island has often been linked to more of a package holiday picture, its volcanic nature – a network of pointed, soaring peaks – actually makes it perfect for a hiking getaway.

Many of Madeira’s best walking routes center around Pico Ruivo, the highest summit at over 1,800 meters above sea level.  Walk the Vereda da Ilha, 8km to the top of Pico Ruiva then down to the village of Ilha, or Vereda da Encumeada, 11km along a mountain pass of the side slopes of the mountain. Alternatively, hike along a levada route – irrigation systems that brought water to drier parts of the island.

Emma Higgins is a British travel writer who spends one year in a region of the world before moving onto the next. She has just come back from living in Portugal, and her latest book A Year in Portugal is available to pre-order now. 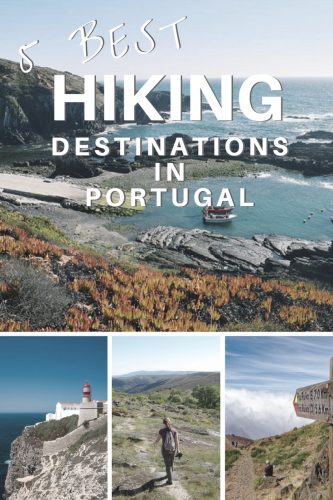