09 Jun Peeking into History at the Military Aviation Museum

Museums are the perfect activity for rainy days, so that’s exactly what we did when we found ourselves in the middle of a thunderstorm on our Virginia Beach trip. We decided to make our way to the Military Aviation Museum for a look around. I was expecting to find a museum with a few planes and a bit of information about the exhibits, but wow, was I wrong. Instead, we found room after room of gorgeous aircrafts, as well as fascinating stories about the history behind the planes and museum. It quickly became one of the more interesting museums we’ve ever had the chance to visit. At first glance, the museum looks pretty basic–you walk in and find several planes, as well as a couple of cars from the WWI and WWII eras. But, when you walk into one of the rooms on either side of the building, you are in for a treat. There are two large airplane hangars with a wide variety of aircraft inside, one hangar is focused on army planes and the other on navy planes. 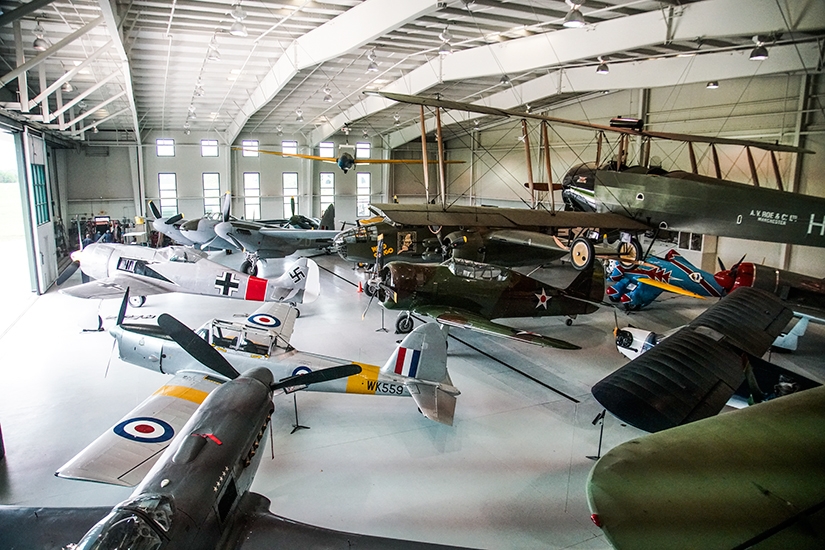 We walked around the hangars with one of the many docents and listened to story after story about the various planes and the parts they played in the history of aviation. Each story was more interesting than the next; I could have listened to the stories all day long. One of my favorites was that of the “night witches”–these planes were flown by women at night over enemy camps during the war. The intent was to wear the opposition down and create a ruckus at night so the enemies wouldn’t be able to sleep. The night witches are an often forgotten piece of history, but they played a very intriguing and important part in the war. Another interesting line of stories involved Glen Curtis and his role in the advancement of aviation. We didn’t know much about him prior to this museum visit, but it was fascinating to hear the huge role he played in the development of planes as we know them today. Glen Curtis was a common thread throughout our next couple of weeks–when we made our way to upstate New York, we learned even more about him and the history of aviation. The upstairs of the museum was home to a display focused on women in aviation, as well as a couple of other exhibits. One of my favorite sections upstairs was one of the enigma machines from WWII–after watching the movie, The Imitation Game, which showed how the machines came about, I was thrilled to see one in person and learn a bit more about how they worked. After wandering around the main museum, we hopped on a guided tour that led us to the additional hangars towards the back of the property. The Cottbus Hangar is an original German hangar that was built in 1934–it was built in a way where it could be disassembled and assembled easily and quickly in case it needed to be repaired or moved. The other hangar in this area was the WWI hangar which opened in 2011; this hangar was built to resemble French barns that were used as hangars during WWI. The last hanger we visited was the fighter factory for a quick peek into the facility where maintenance and annual inspections of the aircraft are completed. All of the planes in the museum have been fully restored, and the majority of the planes are flyable today. During the summer months, you can also take a ride in an authentic WWII plane or watch one of the many air shows that take place in the airspace above the museum.

If you are a history buff or aviation lover, the Military Aviation Museum is definitely worth a visit. Even if you aren’t, we bet there is something inside that might just pique your interest. Sometimes the unexpected really wows you, and that’s exactly why we had such a fantastic time exploring this little, historic slice of Virginia Beach.