It seems as though there are ancient ruins everywhere you turn throughout the entire country of Greece. It’s exciting to think that you are walking amongst so much history, and to see how well preserved some of the sites are. Even though we couldn’t possibly have time to check even a fraction of them out, we did manage to explore three different ruins over the course of our two weeks in the country. We visited Akrotiri in Santorini and the Acropolis and Temple of Olympian Zeus in Athens. Each site was vastly different, and I loved the variety and history behind what we saw.

Situated on the island of Santorini, lies a significant prehistoric settlement—the Minoan settlement is almost 4,000 years old and is said to be one of the most important in the Aegean. Some even believe it might be the lost settlement of Atlantis. Similar to the famous tragedy of Pompeii, Akrotiri was buried by volcanic ash and frozen in time; however, a major difference between the two towns was that Akrotiri had absolutely no human remains. 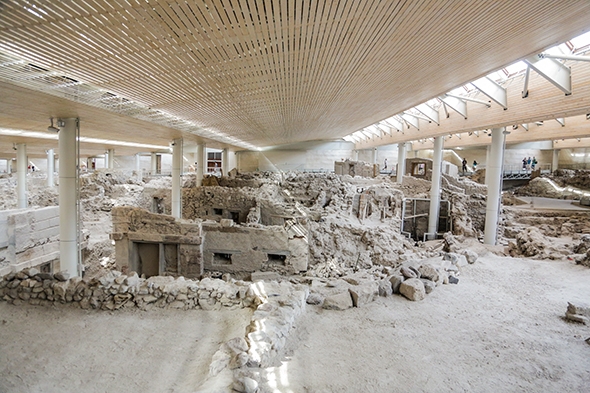 It is thought that the inhabitants evacuated after severe earthquakes, and the volcano eruption followed. Where the residents went and what happened to them is still a mystery to this day. Large scale excavations on the site started in the 60’s, and items such as pottery, furniture, frescoes and advanced drainage systems have all been uncovered. We really enjoyed wandering through Akrotiri—the ruins were very impressive and I loved getting a glimpse into this ancient civilization. The Temple of Olympian Zeus was dedicated to none other than Zeus himself, aka the King of the Olympian Gods, and it was built with the intentions of creating the greatest temple in the world. Construction of the temple started around 520 BC and was abandoned around 510 BC after conflict arose. When the building’s construction was halted, only part of the platform and columns were completed. After numerous attempts at completing the building, it was finally finished around 638 years later. One of the aspects about this site that I really enjoyed was the lack of crowds—compared to the Acropolis, it felt like this site was empty. There is a view of the Acropolis from the temple, and a short distance away from Syntagma Square. Currently, there are 15 columns still standing and another one on the ground. No visit to Athens can be complete without a stop at the Acropolis and the Parthenon. The Acropolis is located on top of Acropolis Rock; in Greek, the word Acropolis means “high city”. The buildings were built between the years of 460 and 430 BC, and the Parthenon has become one of the most influential architectural designs in history and even today, you can see buildings in most any city that were modeled after it. The Parthenon isn’t the only building worth viewing on the Acropolis, though. Some other notable structures are the The Temple of Nike, Propyaia, Theatre of Dionysus and the Erechtheum. Each building has its own historical significance and stories and it was a treat to be able to stand at such a famous historical site. Even though the buildings are remarkably well preserved for being over 2,500 years old, they have seen their fair share of hardship over the years. Unfortunately, wars, looting, vandalism, earthquakes and erosion, have all fallen prey upon the Acropolis at some point in the past. 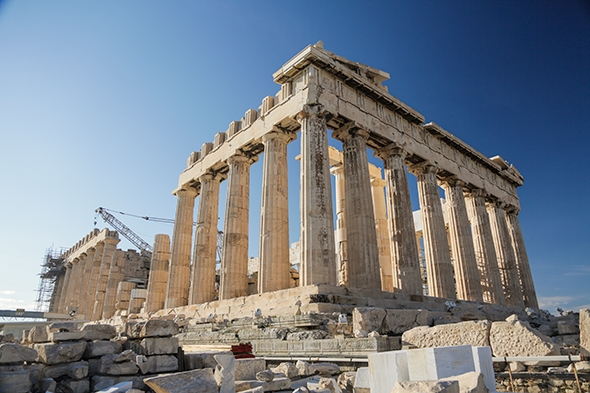 When we visited, there was scaffolding all over the Parthenon—while I understand they are trying to restore and preserve the building to its former glory, it was a bit disappointing to see it this way. It definitely wasn’t what we were picturing in our heads, but overall, it was still a magnificent site to see. Plus, the views overlooking the city were gorgeous. I wish we could have stayed until sunset, but I guess we will just have to save that for our next visit! Have you visited any ruins in Greece? Which ones?

The weather wasn't the best during my time in Latv