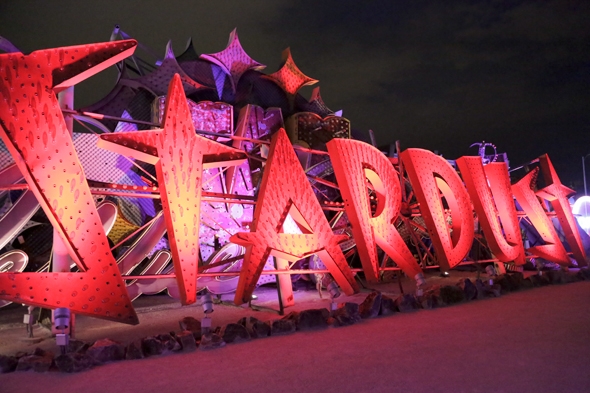 Have you ever wondered what happens to all the neon signs in Las Vegas when they get upgraded or tossed aside for something better? If you answer is no, you are probably in the majority, but you might want to starting thinking about it because it’s actually pretty interesting to learn about where they end up. The Neon Museum in Las Vegas has become the final resting spot for many of the old neon signs that have been retired—this area has been dubbed the Neon Boneyard. Over the years, when a sign was laid to rest, it would be dumped in a pile with others of the same fate. It wasn’t until 1996 that the organization was created with the goal to collect, preserve, study and display the iconic signs for historical and educational purposes. The signs began to be refurbished, the area was cleaned up and the doors officially opened to the public in 2012.

There are around 150 signs in the care of the Neon Museum, most of which are located in the boneyard, but there are several that are restored and displayed along Fremont Street, as well. The museum’s goal is to restore as many signs as possible and place them back out in the community for everyone’s enjoyment. There is also a little park across from the museum where you can learn about the history of the signs. If you want to see more of the signs like we did, hour-long guided tours through the boneyard are offered on a daily basis. You can purchase tickets at the time of the tour, but beware: they sell out fast! Reservations can also be made online up to a month in advance, and I would definitely recommend reserving a spot. We tried making reservations two weeks in advance and the majority of the times were booked up. Originally, we wanted to take a morning tour, but they were all sold out, so we opted for the first evening tour available.

Our tour started at 7:30 p.m. inside the visitors’ center, which is actually the old La Concha Motel lobby. In 2006, the La Concha lobby was moved to its current resting spot and saved from demolition. I was actually pretty happy that we ended up having to book an evening tour because seeing the signs both in the day and at night was a perfect combination. 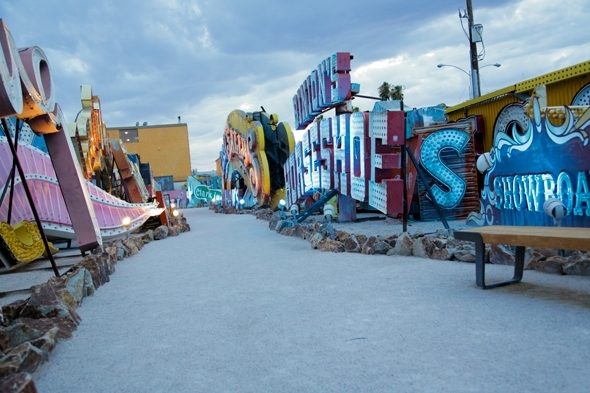 When we arrived, the sun was just starting to set, so we were able to see the first section of signs in the daylight. And, then once the skies turned to black, the show really started. Even though there are only 4 signs that are fully restored and able to light up, the rest were lit by lights shining from the ground up. It was way more spectacular than I could have ever imagined. The sheer size of the signs alone was something to marvel at, but seeing so many close up and personal was really a fun experience. Each sign had its own unique story, and hearing many of them really makes you realize how much incredible history is surrounding you in Las Vegas. There really is nowhere quite like it, and looking at the change in signs over the years, puts the radical development into perspective. One fact I found to be particularly interesting is that the signs on the buildings are not the property of the hotel that they are advertising—they actually belong to the company who makes the sign and the hotel/business just leases the sign along with a maintenance contract. During the tour, you are required to stay close to your guide and cannot lag behind or wander off on your own. Because the tours are outside, there is a possibility of a cancellation due to weather, but cancellations rarely happen. Our tour was almost shut down because of high winds, but thankfully, the winds died down and we were still able to visit. The evening tours are more expensive than the day tours, but I would recommend a night tour if you have the chance. Seeing the signs lit up and not having to stand outside in the brutal sun made the night experience much more enjoyable. Learning all about the signs’ history, how they are made and quirky little facts about each one was a great experience. I’m looking forward to seeing more signs that have popped up around the community next time we are in the area!