Sea turtles are abundant in South Florida, and throughout the past couple of years, we have been lucky enough to have numerous turtle encounters with both adult sea turtles and adorable baby hatchlings. Florida beaches are important nesting grounds for sea turtles—loggerhead sea turtles are the most common in Florida, but green and leatherback sea turtles also nest along these beaches as well. Unfortunately, all species of sea turtles are currently either threatened or endangered; some of the threats to turtles are boats, artificial lighting, pollution, loss of nesting habitat, and interactions with fishing gear. It’s sad to see how many sea turtles are affected by forces that should be controllable, such as pollution and artificial lighting—if we all did our part, there wouldn’t be so many hurt and helpless sea turtles and other creatures for that matter. Because sea turtles have a wide array of dangers to face, I’m happy to say that Florida has many conservation programs in place to help protect and grow the sea turtle population of the world.

We were able to check out a couple of the conservation programs while we lived in Florida, and one of our favorite experiences was attending the Hatchling Release Program at the Gumbo Limbo Nature Center in Boca Raton. Thankfully for us, it was right down the street from where we lived, so it was just a hop, skip and a jump away, and it took place on one of our favorite, go-to beaches, Red Reef Beach. Gumbo Limbo Nature Center is a great facility that focuses on environmental education, research and conservation. The center is open during the day and some of the activities consist of walking the boardwalk and trails to get a glimpse of old Florida’s natural habitat, learning interesting facts in the nature center, viewing sea turtles in the sea tanks, and getting a glimpse into the sea turtle rehabilitation facility. There are also numerous educational programs throughout the year, which include the turtle walks and hatchling release program.

The sea turtle hatchling release program take place from 8-9:30 p.m. on weeknights from the end of July to the beginning of September. For the first hour or so, you will head to one of the classrooms to learn all about sea turtles such as the different types, their nesting habits, the typical life of a sea turtle, dangers they face, and so much more. Just as the presentation was starting to get a bit long, my favorite part of the evening started—the Gumbo Limbo volunteers brought out a couple of baby sea turtles so we could take a look at their cuteness! We couldn’t hold them ourselves, but we were able to take photos and admire them from up close. Once everyone settled down, it was time to make our way to the beach to release the hatchlings. Every morning, turtle center volunteers monitor the nests on the beach; once a nest has hatched, it is marked and 3 days later excavated. If there are any turtles that were stuck inside the nest, they are scooped up and taken back to the facility to be released near the ocean later that evening. Each nest has around 100 eggs, and since it is estimated that only 1 in 1,000 hatchlings survive to adulthood, it is imperative that as many turtles as possible have a chance to survive.

When we arrived at the beach to release the hatchlings collected earlier that morning, we were told to stand in a half circle so everyone could have a good view. There was a large bucket with over 40 turtles in it, and they were all placed out on the sand and encouraged to head towards the water. 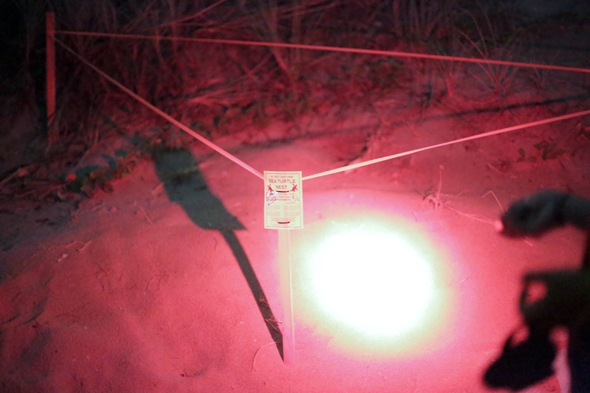 You may notice the red glowing light in all of the beach photos—the red light is there so that we can see the sea turtles on their journey to the ocean, and also because it is less obtrusive to the turtles and it doesn’t confuse them like all other artificial lighting does, aka any light that’s not from the moon or stars. Artificial lighting along the beach can discourage sea turtles from nesting and it can also confuse hatchlings and steer them away from the ocean instead of towards it. This is why there is a lighting ban along many of the Florida beaches from March-October. The majority of the turtles eventually made their way to the ocean, but there were a few stragglers that stayed put or kept walking in the wrong direction—these turtles were brought back to the center for another attempt during the next release. As one of the only three facilities in the state that can conduct a hatchling release program, you can imagine that the tickets are quite a hot commodity. Two-thirds of the tickets are available to only Gumbo Limbo members, but the remaining tickets are released to the public. Tickets usually go on sale at the end of June and they sell out fast, so if possible, it’s best to show up to get the tickets in person. You can also reserve tickets over the phone if you can’t make it there in person, but beware, they may already be sold out. We had a great time on our adventure, and would love to do it again one day!